Geula is Inside you right now – because Chanukah is the light of the future! 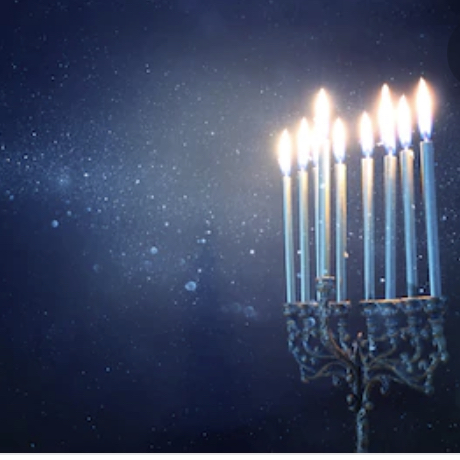 Based on the writings of R’ Rafael Moshe Luria, (as introduced to me by Sarah Yehudit Schneider) and R’ Nachman M’Breslov

I think I’m right at home in this community to be teaching from the Likutei Moharan of R’ Nachman m’Breslov, and the whole piece on chankua is based on mizmor l’sodah, perek 100 of Tehillim, which you just read!

Why is R’ Nachman’s Chanuka teaching all about this psalm/ perek of Tehillim?

So listen to this incredible, incredible idea I heard in the name of R’ Rafael Moshe Luria, a recent descendance of the Arizal.  He says,  listen carefully that the only chagim that are going to endure after the coming of masahich will be Chanuka and Purim.  All the other chagim which relate to coming out of mitzrayim will no longer be as… potent.  Why is that?

Its very interesting because Chanuka and Purim are celebrated in the yemot hachol, the weekdays, and therefore don’t have all the laws of honoring a Yom tov like Pesach, Shavuot and Sukkot.  So why are those two going to endure forever and ever?

(We see this because Aharon was given the mitzvah of menorah forever and ever and it says in the Megilla that Purim will never be obliterated.)

Just a little hint, you can see when you light chanuka candles, in total you will be lighting 36 candles.  36 is the number of hours that the ohr haganuz, the hidden light that Adam and Chava were privy to until they sinned, beamed into the world for 36 hours, because the original light shone on the day of their creation (and sin – Friday), plus Shabbos, 24 hours, thus the first time that night fell was motzai Shabbos – and that’s when we lost the light of future (which is the same thing as the original light),  the ohr haganuz, the hidden light.

Let me skip to what R’ nachman says.  Its all based on mizmor l’sodah, the hundredth chapter of Tehillim.  Maybe you said it 8 times today to represent the 8 days of Chanukah – could be that that’s what R’ Arush had in mind when he told you to do that!

The way that he says it is that in the future, just like the only festivals that we will still be celebrating is Chanukah and Purim, so too the only korban that will be relevant will be, not the sin offering, not the guilt offering, but the offering of thanksgiving, the korban todah.  The only prayers will pray will be prayers of gratitude, not the prayers of need and the prayers of pain that we know of in the exile.

R Nachman says that it is known, that a woman who is struggling to give birth, it is a segula to say perek 100, mizmor l’todah, to help her deliver the baby.  This is so profound because we are now midwifing the Geula, especially as women, but all Klal Yisroel, this is the place we are in history, we are in the birth pangs, its clear that something is happening with this whole corona business, and we are needing to draw on the light of the future, to ignite our Emuna, to ignite our simcha, to ignite our gratitude, as if the redemption has already taken place.  Why does a woman who is struggling to give birth thank Hashem?  Because she is putting herself int to the future and bringing it into the moment  – when she is still in galus!

R Nachman brings this out beautifully from one of the main phrases in this perek, “Ivdu es Hashem B’Simcha – serve Hashem with joy” – really those two terms are in contradiction because service implies the service of a servant, an eved Hashem. But in the future, we are going to be on the level of Hashem’s lovers, either as banim, children, or as a spouse, k’vayachol.  So in the exile we are considered servants, and servants serve their masters our of fear.  Joy and love will be the predominant emotions of the world to come, the future, the time of the redemption.  We are borrowing the simcha, in the language of R’ Nachman, the “sha’ashuim”, delights of the world to come.

So how do we get through the galus?  You light the chanuka candles.  Just like Shabbos represents the future world, when we light the chanuka candles, we’re bringing the light, as if of Shabbos, the cosmic Shabbos, the redemption, into the 8 days that run right through the workweek, the yemot hachol.  We’re bringing that great light into the most dark, the most mundane, the most exiled, the most physical.  That’s really my msg for all of us today, to tap into the redemption now, it’s not something outside of us, something that we are bringing from somewhere way far out there, but its opening up to that part of us that is connected to Geula, being present with Hashem, having so much faith in what’s coming, that we can already taste it, feel it and energize our lives from that place.

Thank you for inviting me and it’s a pleasure to be here with all of you and feel the kedusha of your prayers. May hashem bless us this Chanukah with great light, little tastes of the hidden light, as much as we can contain and share, and may we continue to grow, and rise as women in Klal Yisroel and meet the Geula, speedily in our days.

Sign up to receive new shiurim and community updates.